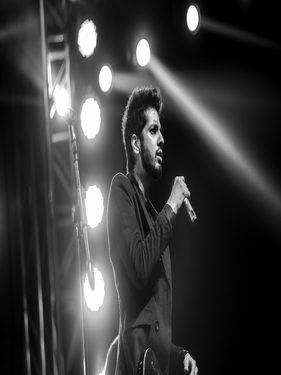 His soulful voice has been captivating music fans all around the country and will continue to do so! He rose to fame with a cover of Aitebaar and went onto make a solid place for himself with the original hit Kali Santro. Abdullah Qureshi is one such musician that our industry can greatly benefit from. Women’s Own reached out to the rising star and asked him all about his upcoming music and what he has been up to in the recent times! 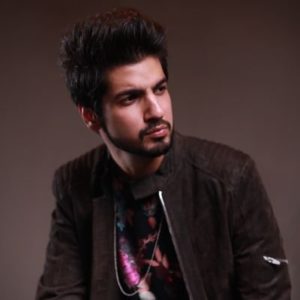 W.O: Talk to me about your journey into music and what made you decide to venture into this industry.

AQ: I have been singing since I was three or four years old. I remember making guitars out of random pieces of wood and acting in front of a mirror as if I was actually on stage. Most of the times, I used to be jumping on the bed, banging my head and imitating other musicians. On my twelfth birthday, I got my first guitar and ventured into making Youtube videos after turning fifteen. Everything started to slowly become a reality. My musical aspirations became bigger since that day and are still growing every second now, Alhamdulillah. I really feel that all that has happened is a blessing because I never tried to discover it; things came to me very naturally.

W.O: Do you remember the first time you performed live in front of an audience? Describe that experience.

AQ: I was six years of age and there was a singing competition in Islamabad where I was to be performing for the first time ever. Naturally, I was incredibly nervous so my mother came to my rescue. She told me to close my eyes and sing my heart out which was what I did after getting onto the stage. I won first prize! My award was a lunch box. The technique that I had applied back then has stayed with me till date. I still close my eyes and sing to the best of my ability on stage, most of the times, because that’s when it’s coming straight from the heart.

W.O: What are some of the challenges that you have faced so far in this line of work and how have you managed to overcome them?

AQ: Well, it so happens that people take you for granted. There’s piracy, nepotism and of course, no such record labels. I don’t want to sound as if I’m complaining but these are very real problems that not just I face but many other aspiring as well as established musicians have gone through or are experiencing too. Several great musicians in our country struggle with such challenges in the industry and these are some big names too; some have died striving, mostly because people in our country want free entertainment as they don’t consider it as an art. The concert culture also suffers because half of the audience members attending the concert want to come for free. Despite all of this, at the end of the day, I think that if you believe in yourself, you get what you want and you manage to change people’s perception too. It’s all hard work and practice that gets you through.

W.O: Talk to me about your favorite collaboration so far and why it is so?

AQ: A few big collaborations are currently in the process right now but when it comes to my favorite one, I would say that it’s with this girl, Nimra, in my song Kali Santro. I found her one day prior to the recording, through a friend, and she was better than I had imagined someone would be for this song. She had the exact Punjabi accent and expression that the song needed for that part. Her voice is a living character in the song.

AQ: I usually start with a guitar riff and then the melody and lyrics come together eventually. Basically, I get inspired by things that affect me or other people within my surroundings; people who have some kind of value in my life. This could be a lover, a friend or maybe even a beggar that I come across. Sometimes it’s natural, sometimes it’s forced but I would say that natural compositions are always better because they can touch millions of hearts.

W.O: Do you get performance anxiety before going onto the stage? If yes, how do you deal with it?

AQ: I used to. Like I mentioned earlier, I would shiver due to nervousness and did not know what to say in between the songs. Later on, I learned that the main technique is to be who you are. Talk to your fans like you talk in daily life and you will be able to control the room and make the fans sing back to you as well. Now, it doesn’t matter whether my performance goes on for one hour or four; I feel like it’s my hour, my stage and my freedom. Sometimes, I don’t even want to stop and get off the stage. It’s a beautiful feeling.

W.O: Who is your inspiration, locally and globally, and why?

AQ: There’s not one. I listen to all kinds of good music and sometimes bad too which is also important so that you are able to differentiate between the two. When it comes to my inspiration specifically, naming one musician would be unfair to other great musicians because the world is full of them.

W.O:  If you could go back in time and collaborate with one artist or band, who would it be and why?

AQ: There are quite a lot of them but if I have to say, it could be Nusrat Fateh Ali Khan or Kurt Cobain. Since I love eastern and western old school music, collaborating with either of them would have been amazing!

W.O:  Talk to me about the one performance which will stay with you forever.

AQ: Well, I participated in this battle of the bands ten years ago and the memory has stayed with me ever since. Basically, I was the guitarist in a band and all of us band members that thought that we have nailed our performance. However, it turned out that we not only lost that battle but also came last because we were not good at all.  The one thing that remains with me was the great feeling of thinking that we were really bringing the house down on stage. It was a wonderful learning experience too. I think it will stay with me forever. 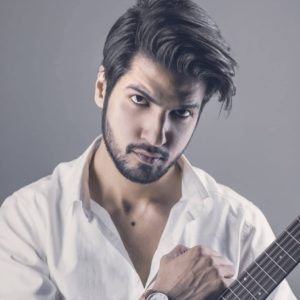 W.O: Name that one song which instantly moves you emotionally.

W.O: What is in store for the future for you?

AQ: 2019 is packed with new original music. I have more than 10-15 songs fully written and composed, 5 of which have already been produced. I am also working on a song for a film called “Heer Maan Ja”. We’re planning big tours and collaborations as well. There are a lot of surprises for the fans which I am quite excited about!

W.O: Talk to me about working on music for the movie, Heer Maan Ja. How has the entire experience been for you?

AQ: Heer Maan Ja was definitely a different experience for me because I’ve never done proper playback before. Previously, I did get offers for a few OSTs for dramas but it was never anything special so I never went for it. In this case, I gave my own song for the film as it’s written and composed by me. It will be my first Punjabi love song. The song is basically a duet with Aima Baig, whose voice is full of filmy expression. I can’t give out much about the song; you will have to wait for the film to listen to it. In the end, we had a really fun time recording it and I’m pretty confident that people are going to fall in love with it upon release.

W.O: You mentioned that you worked on 10 to 15 of your own songs as well. Tell us about them and when will we finally get to hear this music?

AQ: Yes, I have more than 15 songs written and composed. I’ve been writing a lot lately, a few of them are even recorded and ready to be released but I’m just waiting on the videos. There’s an animated video in the pipeline too. The good thing here is that all of the songs I’ve done are different from each other sound wise; from rock to pop to reggae to electronic, there definitely are a lot of surprises. I promise the fans that this year is going to be full of great music insha’Allah!

W.O: Give a message for your fans and our readers.

AQ: Keep listening to good music, keep supporting the musicians and work hard every day on whatever you do best. Work on your weaknesses and make them into your strengths.

Understanding the Science of Sleep