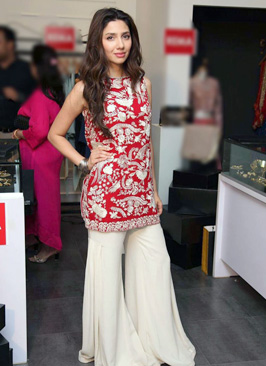 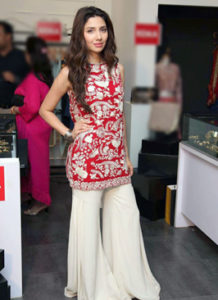 Chinoiserie is a French word which refers to a EUROPEAN artistic style that reflects Chinese influence through use of rather a fantasized and romanticized version of how Europeans imagined people in the far East to be & live.
And in the Indian subcontinent it was truly popularized by Parsis (the Zoroastrians who came to India 1200 years ago from Persia), as they were known as one of the most successful traders in 18th century for China’s opium trade with India. The Parsi men often brought back yardage of hand embroidered Chinese silk for their wives; this coincided with Europe’s infatuation with everything oriental. Eventually women started wearing this silk yardage as saaris when mingling with the English.What makes the parsi gara embroidery unique from other embroideries of South Asia is that it only uses a combination of satin stitch, crewel stitch, stem stitch and French knots in white or pastel colored thread over a darker base fabric. 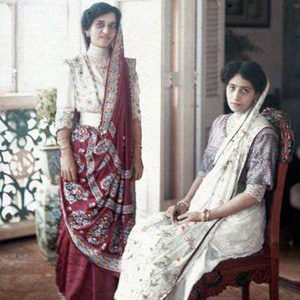 Parsi garas evolved into its own because it amalgamated Persian, Indian as well as European aesthetic. Roosters continue to be featured as they are considered a symbol of light and help ward off evil, the Chinese phoenix coincided well with Persian Simurgh. The roses, jasmine & chrysanthemums are also intricately woven, usually 30 of them to represent the 30 angels for each day of the month. One of the most famous designs are ‘Cheena Cheeni’, which depicts a Chinese man & a Chinese woman against a landscape of pagodas, bridges, plantations and people doing daily chores in China; ‘Karolia’ gara with its spidery flowers; Kanda-papeta (onions and potatoes) gara featuring yellow and pink polka dots; the ‘Marga Margi’, which is a rooster and a hen and there’s a ‘Chakla Chakli’ too, which is a male and female sparrow. 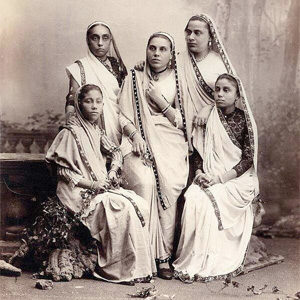 By the early 20th century, there was a community of Chinese embroideries living in Surat, Gujrat, who nevertheless produced work that was completely Chinese in both designs and technique .Their embroidery came to be locally known as “chinai work” and they made garments with fine floss silks in tightly spun two ply silks. After the Second World War many of these craftsmen moved to Mumbai and back to east Asia, some local craftsmen also picked up the trade to cater to the small Diaspora of affluent Parsi women. 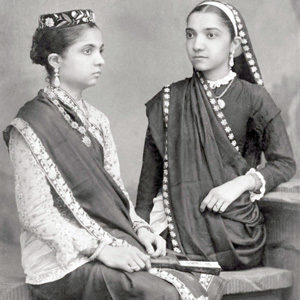 After Independence, Chinoiserie design at large never really achieved the same hallmark status, besides the development of Parsi led evolution of embroideries. For decades there has been an influx of Chinese imports leading to one off designs showing up.
These days you see a lot of designers employing chinoiserie design elements on contemporary silhouettes and with the prevalence of printed textiles such as lawn and silk sold in DIY format you do come across a lot of Chinese and Chinoiserie elements like the pagodas incorporated into the designs.
With CPEC related projects and increased inflow of people from Mainland China come in to live and work here, it is easy to expect that we might experience another resurgence of designs from Far east.
Sadly now Chinoiserie designs are mostly done either via machine or replicated as digital prints on lawn. 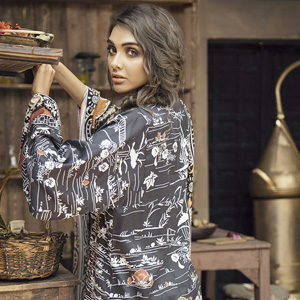