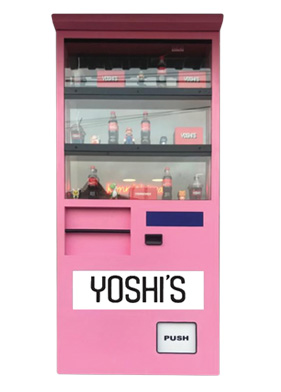 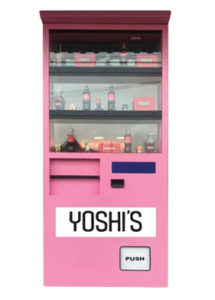 Yoshi’s is a Japanese-American fast food restaurant located around Stadium Commercial Area, Lane 2, Phase 5, Karachi. If you haven’t ever tried the fusion cuisine then do give them a try. They basically experiment with Japanese cuisine giving it an American touch. From the exterior to interior, this place is creative and gives Japanese vibes. The restaurant is decorated with origami paper art and typical Japanese comic characters, makes you feel like you are in mini Japan. Especially that pink vending machine door that doesn’t look like a door at all. To be honest, even when I visited the first time I was confused! 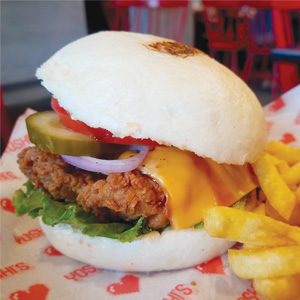 Yoshi`s has theme-based characters which is a major attraction for young customers to enjoy their meals with and also take lots of pictures with. They initially had one brown teddy bear also known as Mr. Y. Now they have also introduced Daisy, another member to the family, a white coloured bear. Not only this, they have many stuffed toys around the place and some miniature arcade games to play with, while you wait for the food to be served. Talking about the menu, if you’re familiar with Japanese food, you’ll understand it better. If not, their staff is kind enough to explain it. If you hesitate while asking, you can always Google the basic terms. They have a variety of items to choose from and every item is unique, including something for sweet tooth also. I’d say, hats off to their chef and team for coming up with amazing recipes. Everything I had at Yoshi’s turned out to be awesome. Here are a few items that I have tried. 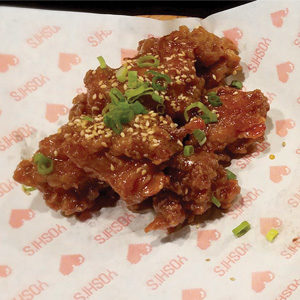 Bagu (burger) you can choose a bao or potato bun. I selected bao bun because obviously, I wanted to try something new. I ordered a Chicken Kaarage burger and oh boy, I became hopelessly enamored with it. The bao bun was extremely delicate and fresh, it was also stamped with their logo. Just in case you don’t know, bao buns are steamed buns. Meanwhile, fried chicken fillet was juicy and tender, topped with a thick slice of cheddar cheese, tomato, pickles, and onion, under a bed of lettuce. I think they should put iceberg lettuce instead of romaine lettuce. They served it with fries. Even their fries were cooked to perfection, golden and crisp from outside and soft from inside. 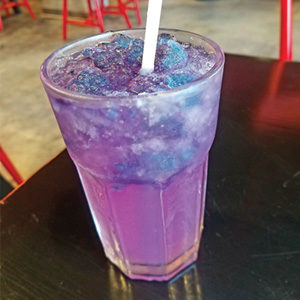 Their staff told me that this is an unique beverage, which they would suggest to order. Of course, I had to try this as the colors made me impulse purchase it anyway. I noticed how everyone was ordering this, so I thought yeah, why not and placed my order. This purple-blue colored beverage is made from yuzu, which is a citrus fruit that tastes like orange and lemon. The flavour was tangy and it was nothing like our regular lemonades. 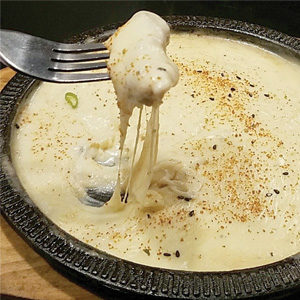 Aligot can be paired with any type of fried chicken. They recommend Korean fried chicken as it is spicy, but I am not into spicy food, therefore I order Japanese fried chicken. It was sweet and sour, topped with sesame seeds, spring onion, and umeboshi (salted Japanese plums) sauce. Their fried chicken wasn’t crispy because plum sauce was sticky and it made the coat soggy. However, when it comes of flavour, it was on point. Aligot is actually a cheesy treat made from potatoes and cheese, it was slightly sweet. I enjoyed every bite of it. Those cheese pulls were definitely drool worthy. If you pair aligot with Korean fried chicken, the combination will be spot on! 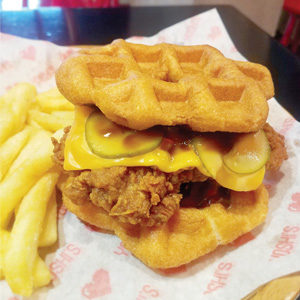 It was definitely not a normal waffle sandwich, they’ve used mochi (rice cake) waffles and mochi is chewy. The waffles were marginally sweet and the chicken was brimming with flavour, it was succulent and crispy. It was topped with a thick cut of cheddar cheese and pickles. Besides this, they’ve added teriyaki sauce, which gave a flavour of fusion. As you take a bite, your taste buds will dance happily. There’s chewy waffle, well-seasoned fried chicken, cheese, tangy pickles, and a brilliant taste of sweet, sour, and salty sauce. I could taste a hint BBQ flavour as well (no idea why). I have had waffle sandwiches previously and I can undoubtedly say this is the best one I have ever had. Once again, this is a combination of sweet and savoury. 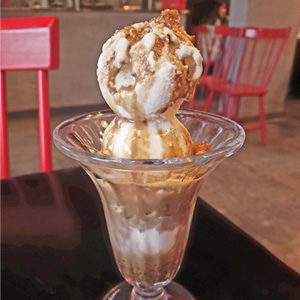 There’s vanilla ice cream with an espresso shot, bits of peanuts and almonds, and I could taste caramel sauce. There seemed to be a trace of cinnamon also. Be that as it may, in general, oh joy! I requested another right after I finished eating this, I all of a sudden pined for more. If you love coffee, this is a treat for you. 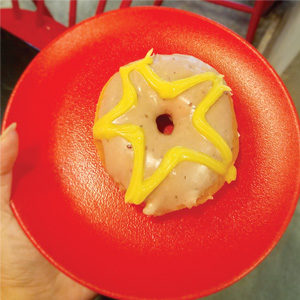 As of now they have two kinds of doughnuts, mochi donuts and regular donuts. Mochi donuts are chewy and small, they serve two pieces together. I had their regular donut which was soft and fluffy. The topping wasn’t a stiff sugar coat, unlike other places, it didn’t tumble off. It was a very soft glossy coat with a noticeable taste of raspberry. Recommended!