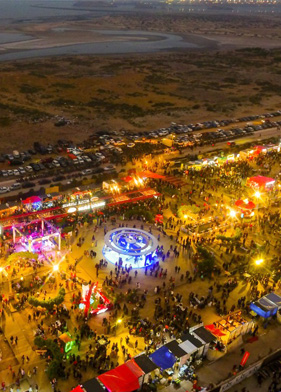 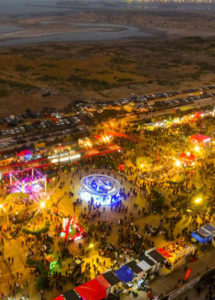 We, Karachiites love food more than anything and during the past few years, the trend of food festivals have been increasing year by year. The first ever food festival is of course, Karachi Eat Festival that is commonly known as KEF. They were the ones to start this trend. The rules and regulations have always been strict, like no stags allowed and men cannot purchase a ticket. They are not permitted to enter without their families. An all boys group cannot enter without a female. This is how they roll. Anyway, KEF was held on 10th, 11th, and 12th of January 2020 at Beach View Park, Clifton. This time they facilitated over 100 eateries and all of those had one star item which is not a part of their standard menu. I noticed that this time, there were many new eateries which might open an actual outlet soon. Well, good luck to them. Furthermore, I noticed a great initiative by EcoPak, they were giving away wooden cutlery and paper straws for free, just to reduce plastic waste.  Now moving on towards the management, which was way better than previous years. The parking system was comparatively better and the entire event was not overcrowded. Though, there were queues on stalls, but this year all eateries were prepared and they were serving on time. The maximum I had to wait for was 15 minutes. Now coming towards food, what did I try? You better continue reading to find out. Oh, I almost forgot to mention, when I purchased tickets, they gave a map, too. This way, I could easily find the stalls I was particularly looking for. Let’s get started with the food reviews.

They had an option to select base and then the flavor of nuggets. For the base, they had two options, mac’n cheese and poutine with three flavors of nuggets, TNT, dynamite, and Korean. I opted for poutine and Korean nuggets. Their poutine had the ideal thick gravy with cheese and fries were not soggy. The Korean chicken nuggets had a sweet and spicy flavor plus their chicken was quite tender and juicy. The combination was awesome! I hope they open an outlet soon as this was one of the most popular stall at KEF. 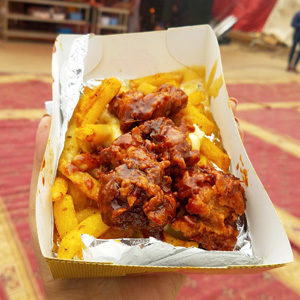 They had 10-12 flavors to choose from, I honestly wanted to try all of them as they looked amazing and people were saying, ‘their donuts are better than Krispy Kreme’. Yeah, they were not wrong. I got double chocolate donuts which had a chocolate filling inside. As I took a bite, chocolate was oozing out. The amount of sweetness was wonderful, it wasn’t too sweet. The donut was flakey and fluffy, just the way it should be. They won my heart. I can’t wait for them to open an outlet. They are taking pre-orders for the time being. 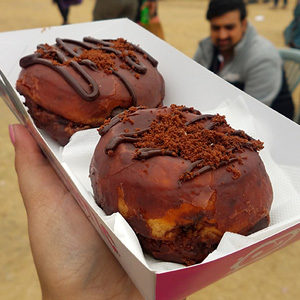 They had three kinds of sliders and one sideline. Those three options were, smoked pulled chicken burger, prime rib burger, and smoked pulled beef burger. I ordered chicken and rib burger, they accidently gave me a beef burger instead. As I mentioned about this mistake, they gave a rib burger on the house. Their rib burger was unquestionably the best, I didn’t have anything that like before, and the meat was succulent itself. Their pulled chicken and beef burgers were juicy, but they had an average flavor. No wow factor. 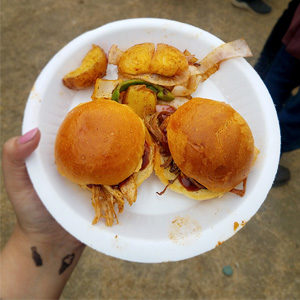 Individuals were raving about their hot chocolate and I couldn’t resist, I had to try this. I’d be happy to say which was heavenly delicious and had a thick consistency. It was served with marshmallows on top. The texture of hot chocolate was smooth and velvety, it felt like I am having melted chocolate. I’m glad that it didn’t taste like the ones made with cocoa powder, which leaves a bad aftertaste. I used to think that Butlers Chocolate Cafe makes the best hot chocolate, but I was wrong. This was way better and pocket friendly, too. Also, they are adding hot chocolate to their menu permanently. 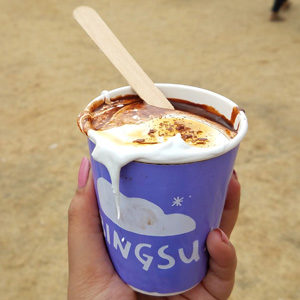 This was another popular stall at KEF as they were making Instagramable hotdogs. People were happily standing in a queue to get their hotdogs. Drty dogs was offering two types of hotdogs only, Mexican and Korean. I opted for a Korean hotdog, it was topped with caramelized onions and sesame seeds. Unfortunately, both flavors were beef, they didn’t have anything for the people who eat chicken.  Anyway, their hotdog was good, it was something worth waiting for. However, I think they should have added chicken hotdogs to their menu. 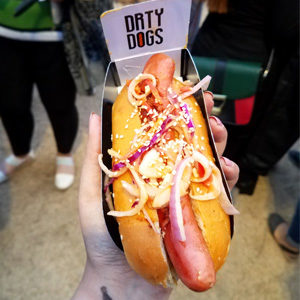 They had two Instagramable items, their slider with magic sauce and fries with magic. I got their fries with magic and it was basically different colors of cheese sauce on top of crispy fries. I delighted in each nibble of it since who doesn’t cherish cheese fries?I liked their concept of vivid cheese sauce, it in reality looked otherworldly. 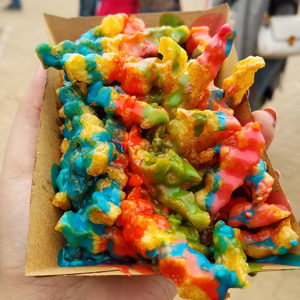 They were serving two new items apart from their regular dosas. Those two items were Masala Idli Chaat and Pav Bhaji. I tried their masala idli chaat and I believe their idli was better last year. It wasn’t bad, however the texture of idli was a little stiff this time. It was topped with sweet yogurt, sev, coriander, tomatoes, tamarind sauce, curry leaves, and chaat masala. Overall, it was nice. They should increase the quantity of yogurt and tamarind sauce to overcome the dryness. 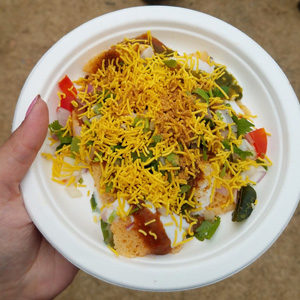 This was yet another famous stall with a queue. Their menu comprised of two things only, beef donut burger and chicken donut burger.  I was looking for a chicken burger and mostly eateries were only selling beef burgers, so at last I found a decent crispy chicken burger. Their donut bun was sweet and even had a proper donut shape, yes with a hole in the middle. Their burger had pickled purple cabbage and some kind of hot sauce, too. As the bun was sweet and crispy fried chicken patty was topped with hot sauce, it turned into a wild enticing blend. As you take a bite, it’ll be sweet and as you start chewing, the spice will kick in! I loved it. They have an outlet as well. 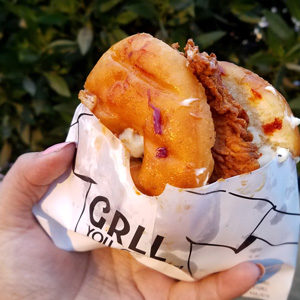 They had three items on their menu that was chic ‘n’ cheese spaghetti, khausa, and Singaporean rice. Their khausa was the best at KEF and they generally make good khausa as well. I truly missed malpuras that they served during the previous KEF. Sadly, they didn’t have it this time. I didn’t get an opportunity to take a picture at KEF, so here’s a picture that I took earlier. They always give a generous amount of khausa that is more than enough for one person. They don’t have an outlet yet though. 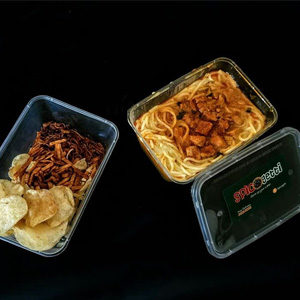